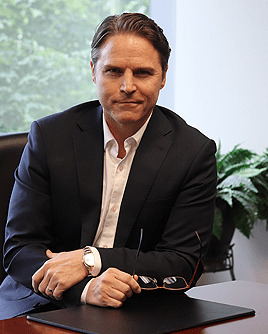 Tom is a Managing Director with EdgePoint Capital Advisors.  In this role, he is responsible for advising the firm’s clients in matters related to mergers, acquisitions and financing transactions.

Prior to joining EdgePoint, Tom spent nearly 14 years at KeyBanc Capital Markets, Inc. in Cleveland, OH as a senior investment banker in the Mergers & Acquisitions and Financial Sponsor Groups.  During his tenure at Key, Tom worked closely with privately held and publicly traded companies, leading the execution of middle market transactions across a range of industries, with an emphasis on businesses in the Industrial, Energy and Infrastructure sectors.  His financial advisory experience includes buy and sell-side M&A transactions, public company mergers, fairness opinions, corporate divestitures, as well as a variety of debt and equity financings.  As a member of the financial sponsor coverage group, Tom initiated and led coverage of Energy and Infrastructure focused private equity fund sponsors.

Tom also served as a Vice President in the investment banking group at NatCity Investments, Inc. where he managed merger and acquisition transactions for clients in the industrial and manufacturing sector.  Prior to NatCity Investments, Tom spent 3 years as an Associate in the Investment Banking Division of McDonald Investments, Inc. where he worked in the M&A and Energy Groups.  he also served as a consultant in the Global Professional Services Group at CA, Inc. and held several positions at the Sherwin-Williams Co.

Tom earned his MBA in Banking and Finance with distinction from the Weatherhead School of Management at Case Western Reserve University and earned his BA from the University of Michigan.

Education
Weatherhead School of Management CWRU
University of Michigan
Licenses
FINRA Series 7, 79
Connect with me on LinkedIn.
LINKEDIN
We use cookies on our website to give you the most relevant experience by remembering your preferences and repeat visits. By clicking “Accept All”, you consent to the use of ALL the cookies. However, you may visit "Cookie Settings" to provide a controlled consent.
Cookie SettingsAccept All
Manage consent