The pricing multiples shown below are averaged multiples of EBITDA paid by private equity groups for privately owned manufacturers in each range of Total Enterprise Value. In addition to identifying general pricing trends over time, the multiples can be useful in developing a ballpark estimate of a company’s market value. However, using them as a valuation tool requires an understanding of composition of the chart provided by GF Data® and adjustments that should be made to both EBITDA and the published benchmark multiple. 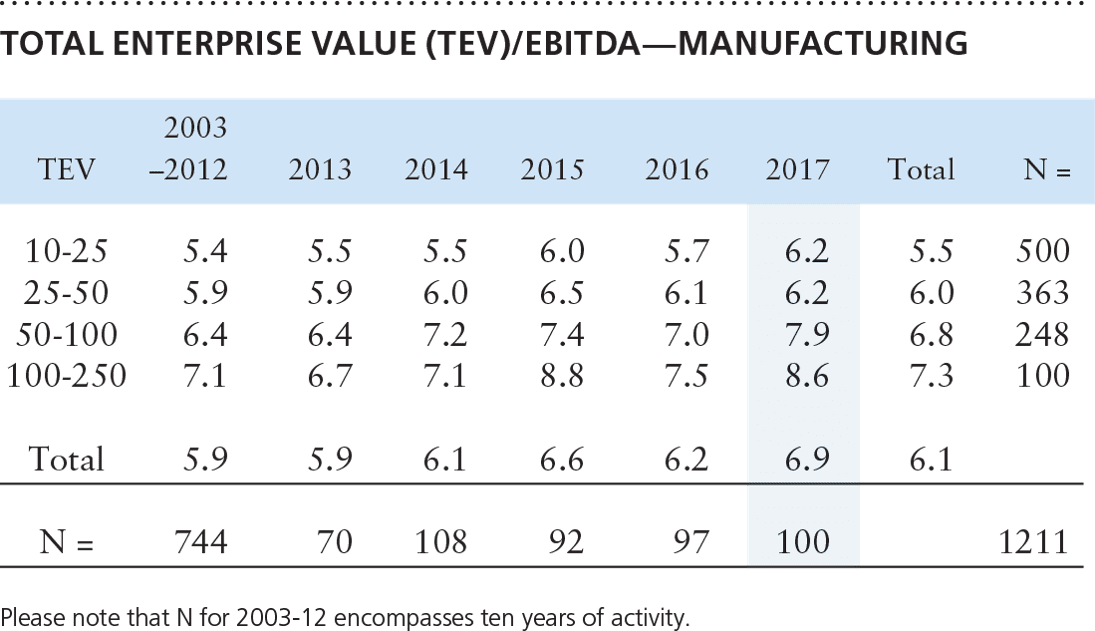 The multiples are derived from transaction information provided by two hundred and fifty-seven private equity groups on a blind and confidential basis. They are based on the selling companies’ Trailing Twelve Months Adjusted EBITDA. Only multiples ranging from 3 to 15 were used, essentially eliminating venture or distressed transactions in order to provide consistent information involving mature, profitable companies.

Total Enterprise Value or “TEV” in the far-left column of the chart is comprised of both the equity and the debt in a company, like the equity plus the mortgage in a house. It also includes a likely adjustment for the amount of working capital needed for the company to operate in the manner in which it had operated prior to sale. As evident, the larger the TEV, generally the larger the resulting multiple.

EBITDA or Earnings Before Interest, Taxes, Depreciation and Amortization was “adjusted” in each transaction by adding back extraordinary and non-recurring expenses. An adjustment was also made to executive compensation by adding or subtracting the amount by which it was above or below the estimated market rate of a professional manager. As indicated, among the 100 manufacturing companies acquired in 2017, those with selling prices between $10 million and $25 million as well as those with selling prices between $25 million and $50 million sold for an average of 6.2 times their adjusted EBITDA.

Estimates of value using market multiples are accurate only to the extent that comparative data are used from the sale of comparable guideline companies. Adequate data from enough truly comparable companies are very difficult to find. Given a reasonable number of transactions, GF Data’s disciplined approach to gathering and evaluating data together with its use of averages can provide a credible vehicle for benchmarking. This is because private equity groups are remarkably consistent in the core qualities they seek in a prospective acquisition:

Assuming that the qualities above were largely present in the companies acquired at an average multiple of 6.2 times adjusted EBITDA in the $10 - 25mm TEV size range, they can be used as guidelines to estimate a selling multiple for a prospective seller in the same value range. For instance, a non-proprietary contract manufacturer in a highly competitive market may be expected to command only a 4.5 selling multiple even though it has most of the other attributes cited above. Further adjustments may be needed depending upon prior years’ performance or even anticipated future performance - to the extent that anticipated performance can be credibly defended. Should, for instance, a 20 percent growth in EBITDA during the Trailing Twelve Months be sustainable, boosting the 4.5 multiple to 5.5 would likely make sense provided that the percentages of sales to the larger customers would stay in balance.

The final step in selecting the appropriate multiple to apply to adjusted EBITDA involves evaluating the composition of the subject company’s balance sheet and how it may have changed over the past several years. Inventory and receivables management practices, for instance, can have significant effect on cash flow and thereby could necessitate further adjustments.

As may be evident, one needs to have a lot of experience within the private merger & acquisition market to be able to make the appropriate adjustments to a benchmark multiple. The resulting estimate of market value can be useful to a prospective seller, but it is still an estimate and best used in conjunction with other valuation methods.

© Copyrighted by EdgePoint. Tom Zucker can be reached at 216-342-5858 or at tzucker@edgepoint.com